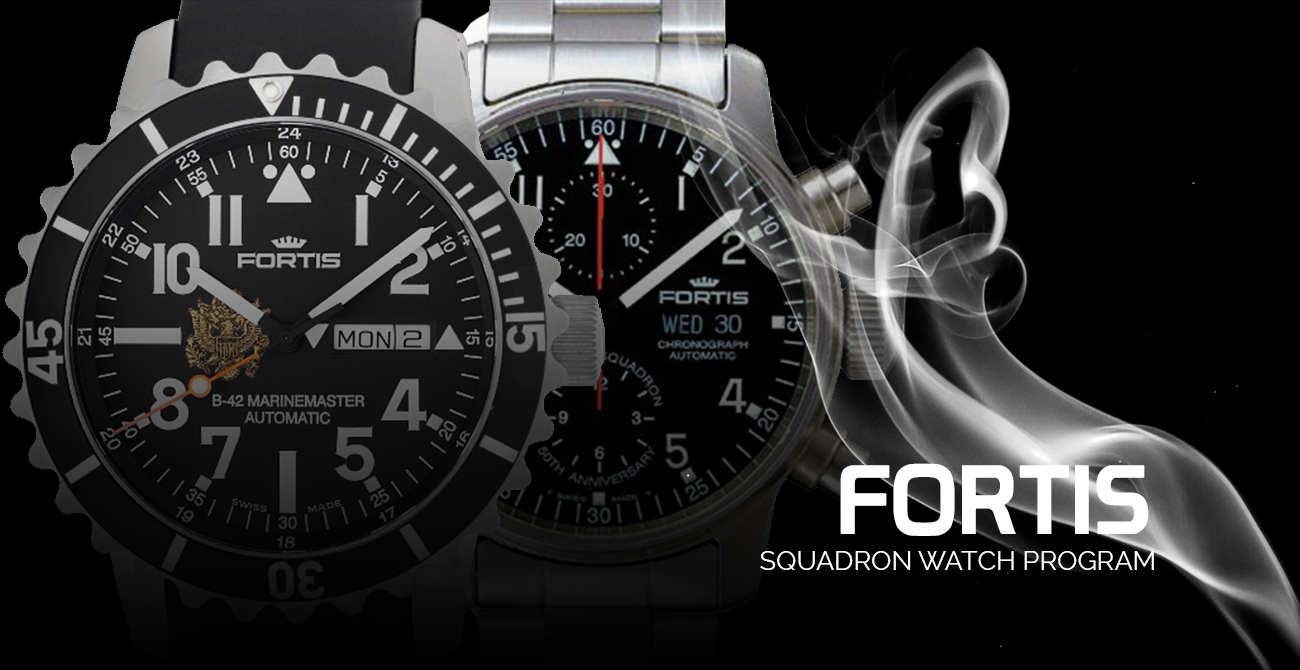 Fortis means “strong” in Latin and the name has come to represent strength in the watch world as well. Ever since the company was founded in 1912, the Fortis name has become synonymous with the kind of toughness that the world’s military forces depend on. That’s why generations of rugged and durable Fortis pilot and military instrument watches have long been a favorite in military circles.

Fortis chronographs have a reputation for precision and accuracy that has been confirmed by an elite group of aeronautical squadrons from around the world. These fighting forces have chosen Fortis as their official timepiece for professional duty. For many years Fortis watches have been issued to Russian Cosmonauts, Russian MiG Pilots and Swiss Air Force pilots.

As the reputation of Fortis watches grew in military circles, the company established a special division to equip international military squadrons with exclusive limited edition squadron watches emblazoned with the squadron’s own insignia on the dial. The pilots and crew of several famous international squadrons, from famous aerobatic teams to renowned combat squadrons, now wear these exclusive watches.

The famous Fighting Falcons, who fly the F16A, are currently equipped with a special squadron edition of the Fortis Flieger Chronograph featuring the Fighting Falcons insignia. The German “72 Westfalen” fighter squadron, flying F-4F Phantom jets are also equipped with Fortis Squadron watches featuring their squadron insignia. The exclusivity of a Fortis Squadron Watch makes it one of the world’s most desirable watches. If you are lucky enough to obtain one of these exclusive timepieces, you probably got it from a pilot or crew member wearing the same insignia as is on the watch.

Fortis Squadron Watches are worn by the Hungarian Air Force, the Greek “Hellenistic Tigers”, the Taiwanese “Thunder Tigers” Aerobatic Team, and the German Air Force Reconnaissance Unit. The Fortis Squadron Program is open to all squadrons and active duty fighting forces from around the world.

If you would like to have your own pilots and crew wear your squadron insignia with pride, Fortis will make a watch just for you. You can choose from famous watches like the Pilot Professional Day/Date, The Flieger Chronograph, the Spacematic GMT, and even the renowned B-42 Official Cosmonauts Chronograph.