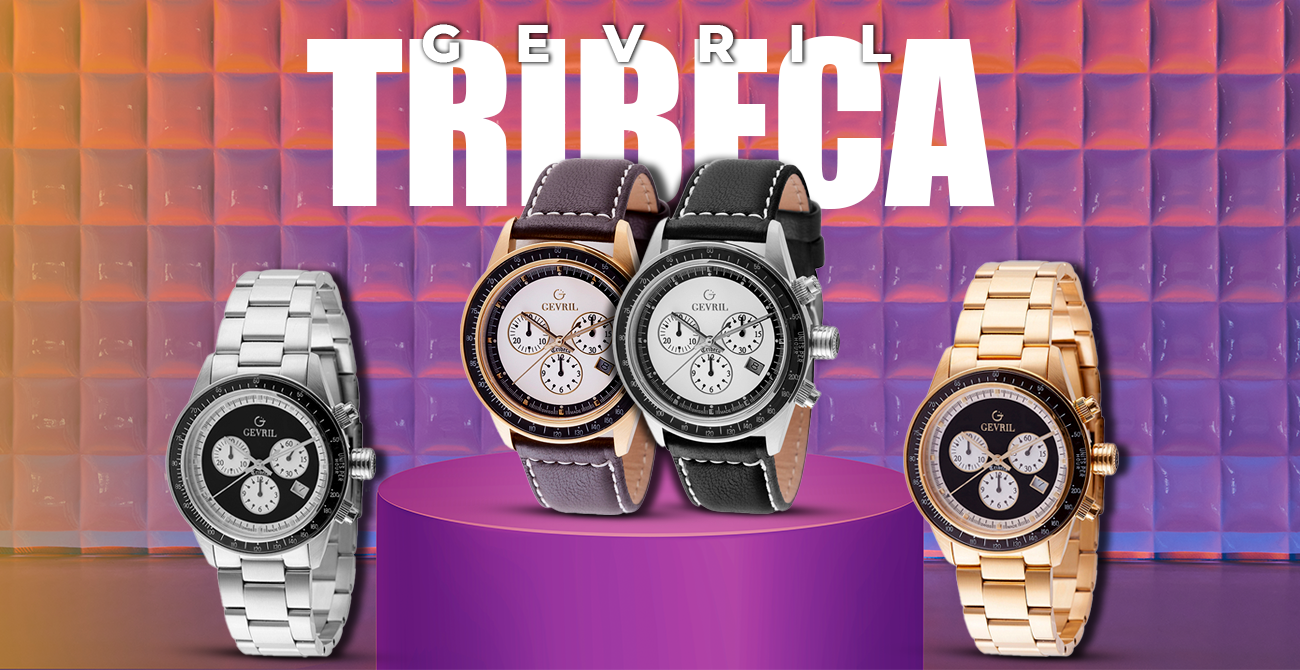 The Revamped and Re-energized Gevril Tribeca

In the late 1990s Gevril released one if its most recognizable models – the Tribeca – named after the lower Manhattan neighborhood below Canal Street, which today is one of the most prestigious areas in all of New York. Gevril’s Tribeca was a triple-register chronograph with a design that evoked a look made popular in the ’60s and ’70s – a look so enduring, it is more popular now than ever before.

This year Gevril is releasing an updated version of the men’s Tribeca. At a glance, the overall look of the watch appears to be almost the same. But a closer inspection reveals a number of key changes including, first and foremost, the case diameter: the new Tribeca hits the contemporary sweet spot of 42 mm compared to the previous 37 mm, which many today would classify as small.

The new Tribeca also has different case and dial combinations than its predecessor. The stainless steel versions have black or white dials, and come mounted on black leather straps with contrasting stitching and prong buckles or on stainless steel bracelets with deployant buckles. Similarly, the models with IP gold cases have white or black dials and come mounted on brown leather straps or on IP gold bracelets. Every model has the customary Tribeca black bezel equipped with a tachymeter scale for use with the chronograph in measuring elapsed time.

There are other subtle differences with the case construction, too. Gone are the visible lug holes on the outside of the case, which are replaced instead with solid, more refined “no-hole” lugs. Acrylic crystal is replaced by harder, scratch-resistant sapphire. And the screw-down crown and pushers feature more detailing: a crosshatch pattern decorates the tops of the pushers while the crown has fluting around the base and a pattern along the top. The watch’s screw-down capability supports its water resistance rating of 330 feet.

On the dial, the sweeping arrow-tip chronograph seconds hand remains, as do the luminous hands and the square-foot indices in the sub-dials. A new addition is the appearance of the name Tribeca above the 6 o’clock sub-dial written in a font reminiscent of English Towne, which many will find familiar as the nameplate font of the New York Times. Also new on the dial are the case-matching gold- or silver-colored accents.

Internally, the new Tribeca eschews the mechanical movement found in the old model for a Swiss quartz Ronda 5030D. The switch represents a move toward greater accuracy and also adds a date function, which was conspicuously absent from the earlier edition.

Gevril shows confident restraint in its update of the Tribeca, preserving the best elements of the original ’90s offering rather than making sweeping changes. But an essential update to the case size means the new Tribeca is better suited to contemporary style, and the addition of a Swiss quartz movement means the watch is more durable and affordable.

The Tribeca is revamped and re-energized for a new generation of collectors. Contact an authorized Gevril watch dealer for more information.