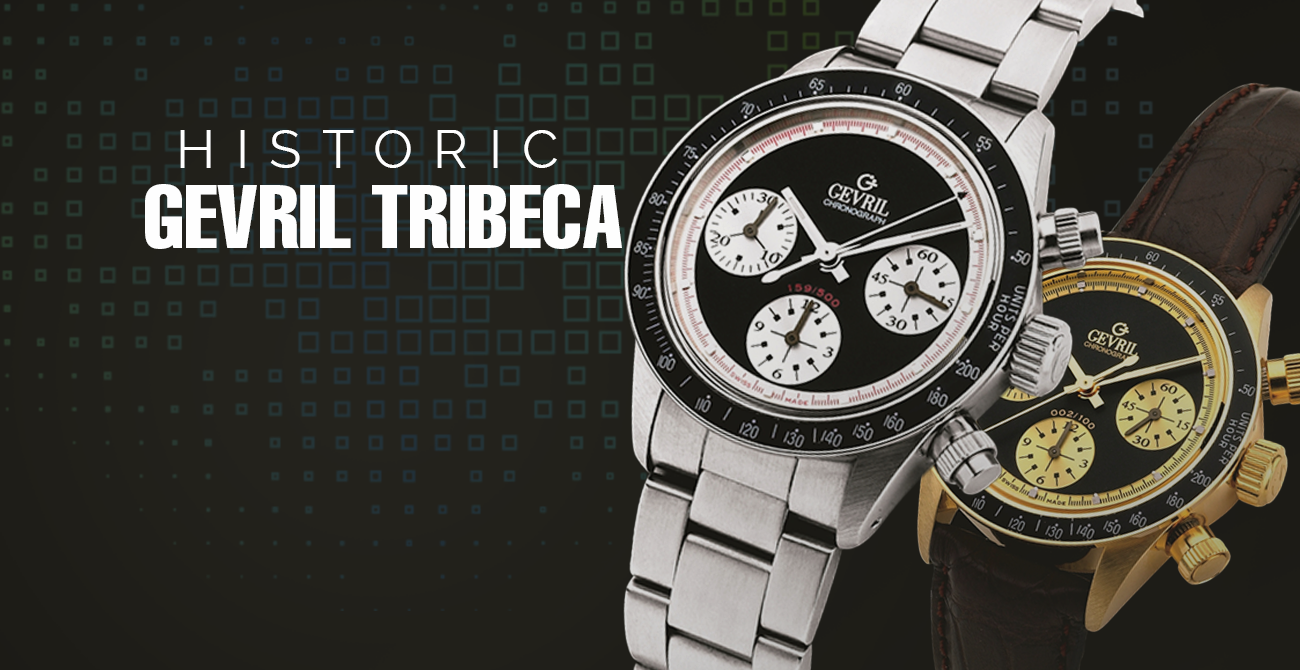 Fans of Gevril watches know of the company’s penchant for naming its watch collections after famous or important New York City neighborhoods and landmarks. These include the brand’s signature Avenue of Americas collection and the current Columbus Circle and Gramercy collections. Several other similarly themed collections have appeared in the Gevril lineup over the years, collections long sold out or discontinued. One of these is the Tribeca, released in 1999.

Tribeca is an area in Lower Manhattan. The name is an acronym taken from the words Triangle Below Canal (Street). The area (actually a trapezoid) evolved in the 20th century from an industrial center to an artist community to what it is today: an upscale residential neighborhood, among the most affluent ZIP codes in the entire city and home to numerous celebrities and other notable figures.

The Tribeca watch collection aspired to celebrate the notion of “seizing the moment and the bounties of life,” a phrase that appeared in the original catalog entry. Indeed, the Tribeca chronograph was abundantly detailed. The overall design pays homage to a famed chronograph style of the ’60s and ’70s with its triple registers, square-foot indexes and arrow-tip chronograph hand. The design just works: it is contrasting and capacious with a down-to-earth simplicity that is admired by watch enthusiasts to this day.

In addition to the famous black-on-white “panda” style dial, the Tribeca dial also appeared in a white-on-black variation, as well as a black-on-champagne and its reverse, champagne-on-black. Like other Gevril collections, the Tribeca was produced in a limited edition of just 500 watches per steel variant and 100 watches per gold variant, each individually numbered on the dial. Covering the dials were hesalite (acrylic) crystals, softer than sapphire, but domed and rich in vintage charm.

There were two variations of the case: one in stainless steel, the other in 18 kt. gold. The cases were 37 mm. The bezels were either black enamel or polished stainless steel and featured tachymeter scales. Tribeca watches had solid casebacks and fluted screw-down pushers and crowns, which added to their 330 feet of water resistance. All of the cases featured “holed” lugs, meaning the holes for the spring bars were drilled all the way through the lugs and were visible from the outside. Holed lugs added desirable character to the watches and, on a practical level, made it easier to change the straps or bracelets.

The Tribeca models with white-and-black dial combinations came on stainless steel integrated bracelets while the gold-and-black versions were offered on brown crocodile straps with 18 kt. gold buckles. Inside, the Tribeca housed a 51 jewel automatic movement made up of an ETA 2824 with a Dubois & Dépraz 2020 chronograph module.

Gevril’s Tribeca is as an excellent example of the brand’s commitment to quality and craftsmanship, and one of its most compelling offerings of the 1990s with an effortless and composed design that will be valued for many years to come. If you are interested in picking one up, check the auction sites – they do occasionally come up. The Tribeca would make an excellent addition to any watch collection.