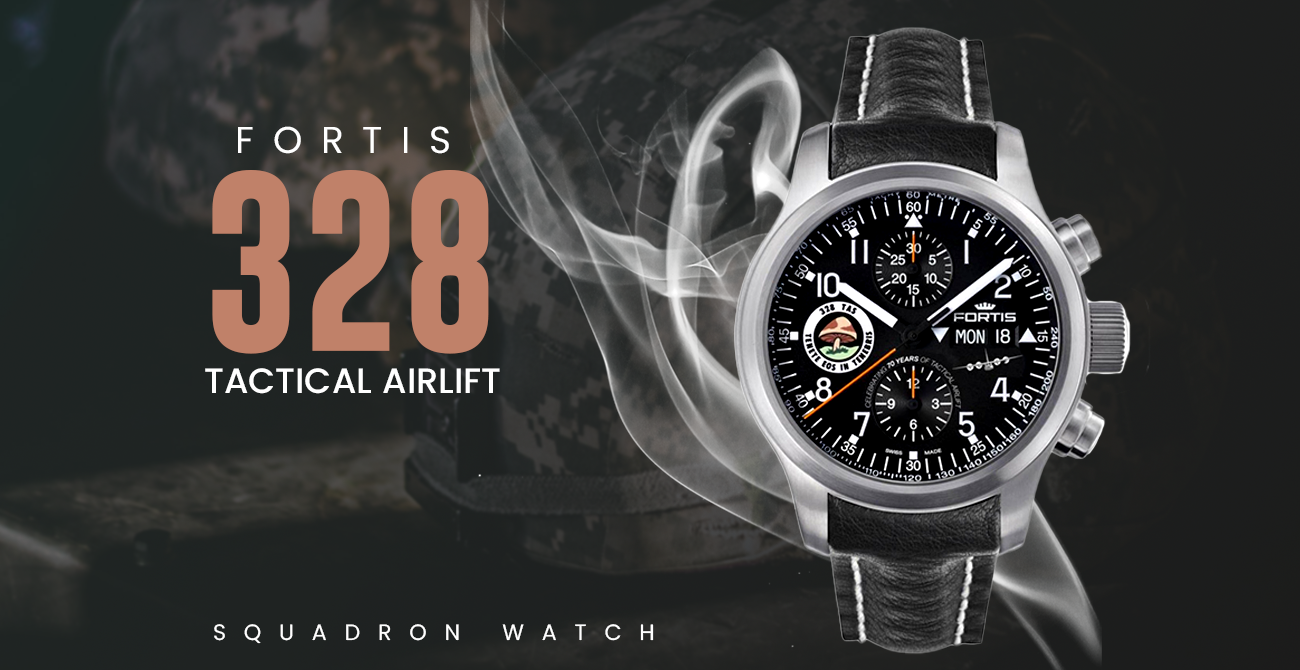 The United States Air Force 328th Tactical Airlift Squadron (TAS) has been providing dedicated airlift support for every major conflict the United States Air Force has been involved with since World War II. Not only has the squadron amassed an impressive 130,000 hours of flight time without a mishap, they were also designated the “World’s Best Airdrop Crew” in 1996 at the McChord Air Force Base worldwide airlift rodeo. With a heritage that goes back to supporting combat operations in Burma during World War II, the 328th has always been there whenever the military needed to move troops and equipment during wartime.

It is no surprise that this unit, which has served proudly in Asia, the Middle East, and other hot zones around the world, would choose a timepiece with an equally illustrious history for their official squadron watch. The iconic Fortis B-42 Pilot Professional Chronograph has long been a favorite of astronauts and aviators whenever the mission has been critical.

The special limited edition of the B-42 Pilot Professional Chronograph Fortis created for the 328th features the unique 328th Tactical Airlift Squadron insignia with its camouflaged mushroom and the Latin slogan “Tenete Eos In Tenebris,” which translates to “Always Kept in the Dark” in English. The dial also includes a rendition of the Lockheed C-130 Hercules aircraft currently operated by the squadron directly below the day/date window, along with the slogan “Celebrating 70 years of Tactical Service” wrapped around the 12-hour totalizer at 6 o’clock. There is a second 30-minute totalizer at 12 o’clock.

Like all Fortis B-42 Chronographs, this superb tool watch is easy-to-read even under difficult lighting conditions. The entire length of the pencil hands has been painted with bright white superluminova material and the three chronograph hands are a bright orange. There are arrows near the large day/date window at 3 o’clock indicating which direction the crown should be turned when making adjustments, along with a handy tachymeter scale on the chapter ring flange. The 42 mm stainless steel case is water resistant to 660 feet and includes an anti-reflective, scratch resistant crystal protecting the dial, along with a clear exhibition back, making it easy to view the precision Swiss made Valjoux 7750 movement within.

The 328th Airlift Squadron has provided critical airlift support for every major conflict since World War II. It is only fitting that squadron members are now supported by something equally reliable on their wrist. This is a timepiece that the entire squadron can wear proudly while on duty and pass down later as a treasured heirloom.