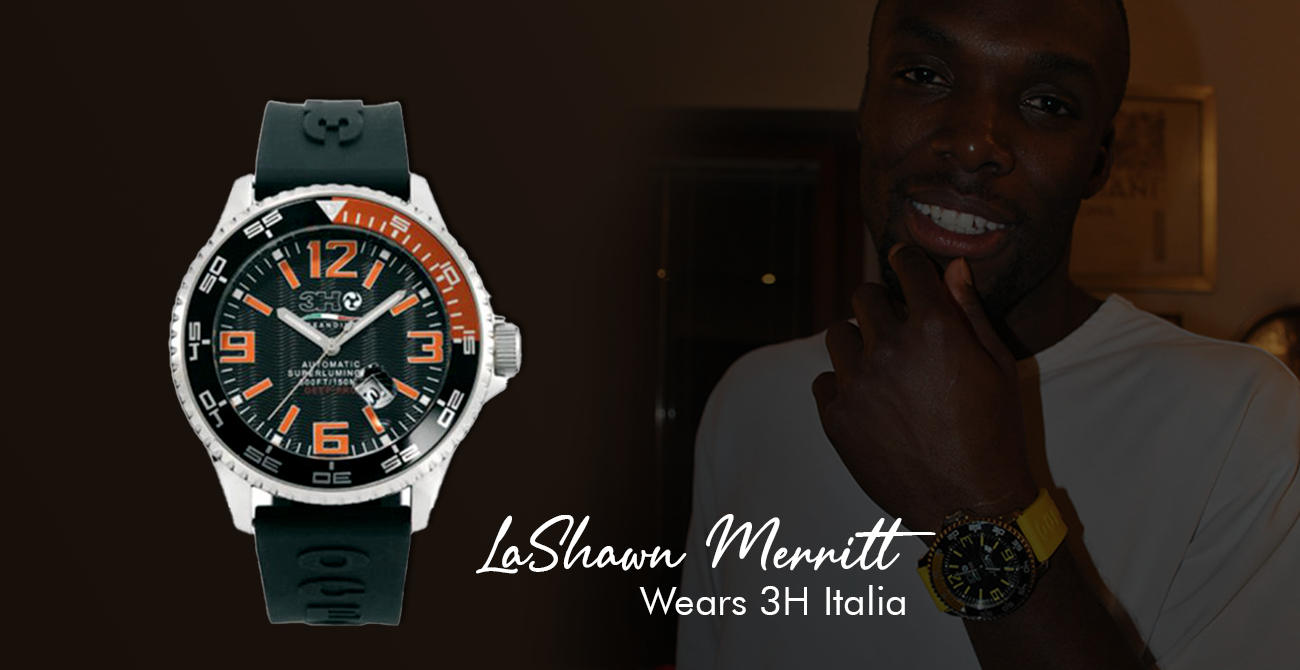 While Many Will be Watching World Champion LaShawn Merritt’s
400-meter Times, Others Will be Looking at What’s on his Wrist
LaShawn Merritt is hard to ignore. The world champion sprinter specializes in the 400-meter dash and is currently the fifth fastest man of all time, after an impressive win at the 2008 Summer Olympics in Beijing. Merritt was the number one qualifier at the 2012 Olympic Trials and was poised to defend his gold medal. Unfortunately he tweaked his hamstring during a race leading up to the 2012 Olympics and was unable to compete.

This year, LaShawn Merritt has chosen to wear a watch that is as impressive as he is: the boldly styled 52 mm 3H Italia Steel Diver. This massive precision timepiece features an easy-to-read three-hand configuration with a unidirectional rotating bezel and is water resistant to an amazing 500 feet. LaShawn knows a winner when he sees one and he has definitely selected a serious diving tool. The 52 mm Steel Diver is powered by a precision automatic mechanical movement and has a protected screw-down crown, as well as a screw-in stainless steel back. With bright yellow numbers and indices, a durable mineral glass crystal, and a magnifying date display between 4 and 5 o’clock, this is a watch that is ready for anything.

3H Italia has long been a favorite with professional athletes. World famous soccer stars Rino Gattuso, Guti and Leonardo Bonucci all wear 3H Italia timepieces. So does championship racing driver Niki Lanik. As the world waits to see if LaShawn Merritt can beat his own record time, we already know how he’s going to tell the time.

If you’d like to wear the same watch as the fifth fastest man in the world, dash over to an authorized 3H Italia dealer immediately and ask to see the 52 mm diver collection. With headquarters in Viterbo Italy, 3H Italia now distributes their popular timepieces worldwide in countries including: the United States, Canada, Spain, Germany, Austria, Switzerland, Greece, the Netherlands, the Scandinavian Peninsula, Hong Kong, and Portugal. In the United States, 3H Italia timepieces are distributed exclusively by the Gevril Group.