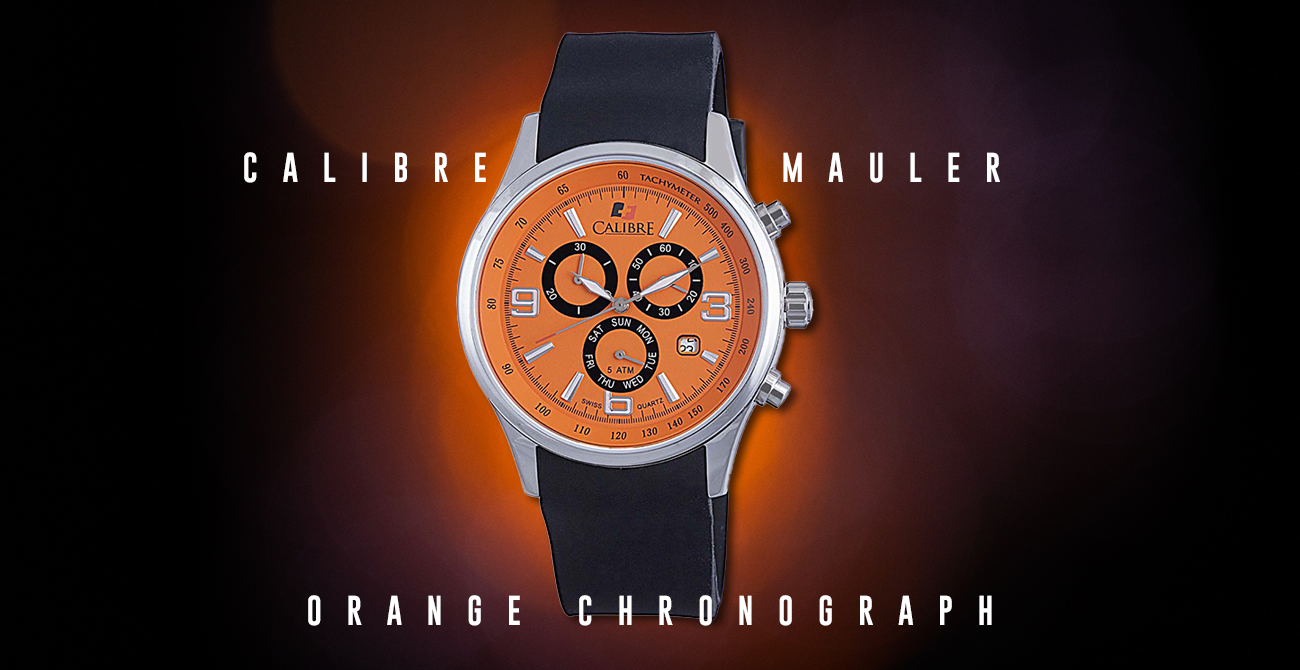 Calibre is a company that specializes in sport watches for activities including sailing and diving. When you concentrate on one area you’re bound to become an expert and from Calibre’s offerings, it’s obvious they’ve perfected the art. A chronograph sports watch is one of the most adored in the category and the Calibre SC-4M1-04-079 Mauler is a great example of one with style and function.

There’s a reason the chronograph is particularly associated with sport. First developed for scientific study, it was later popularized when Nicolas-Mathieu Rieussec built one so King Louis XVIII, a horseracing aficionado, could time his ponies. Built for timing intervals, it later became required equipment for racecar drivers burning rubber around the track in the chase for the checkered flag.

The Calibre SC-4M1-04-079 Mauler immediately catches the eye with its striking orange dial. Not only is the color orange often associated with speed, it’s right in line with the technicolor hues that rocked the runways this summer, including, blue, green, and, of course, orange. Illuminated hands and Arabic and baton numerals give this watch great visibility when lighting conditions are less than ideal. Right in line with the sport theme, the Calibre SC-4M1-04-079 Mauler includes a tachymeter with black numerals around the flange for measuring distances and speed.

But the Calibre Mauler SC-4M1-04-079 is a chronograph, so that’s the highlight of the dial with the subdials circled in black to bring the focus here. This chronograph comes in a tri-compax layout and traditionally these dials are used for timing seconds, minutes and hours. And, the dials at 9 o’clock (30 minutes) and 3 o’clock (60 seconds) do. However, the Calibre Mauler SC-4M1-04-079 gives the extra complication of day of the week at 6 o’clock along with a date aperture at 4 o’clock.

In a well-sized 42 mm stainless steel case, the Calibre SC-4M1-04-079 Mauler has round chronograph pushers at 2 and 4 o’clock between the crown. It’s powered by a reliable quartz movement and is complemented by a black silicone strap with buckle. Purchase your new Calibre Mauler watch from an authorized Calibre dealer.

Gevril Group is the sole US agent for Calibre Watches. Contact Gevril Group by email or call 845-425-9882.

In Europe, the Calibre brand is distributed by Gevril Group Europa.