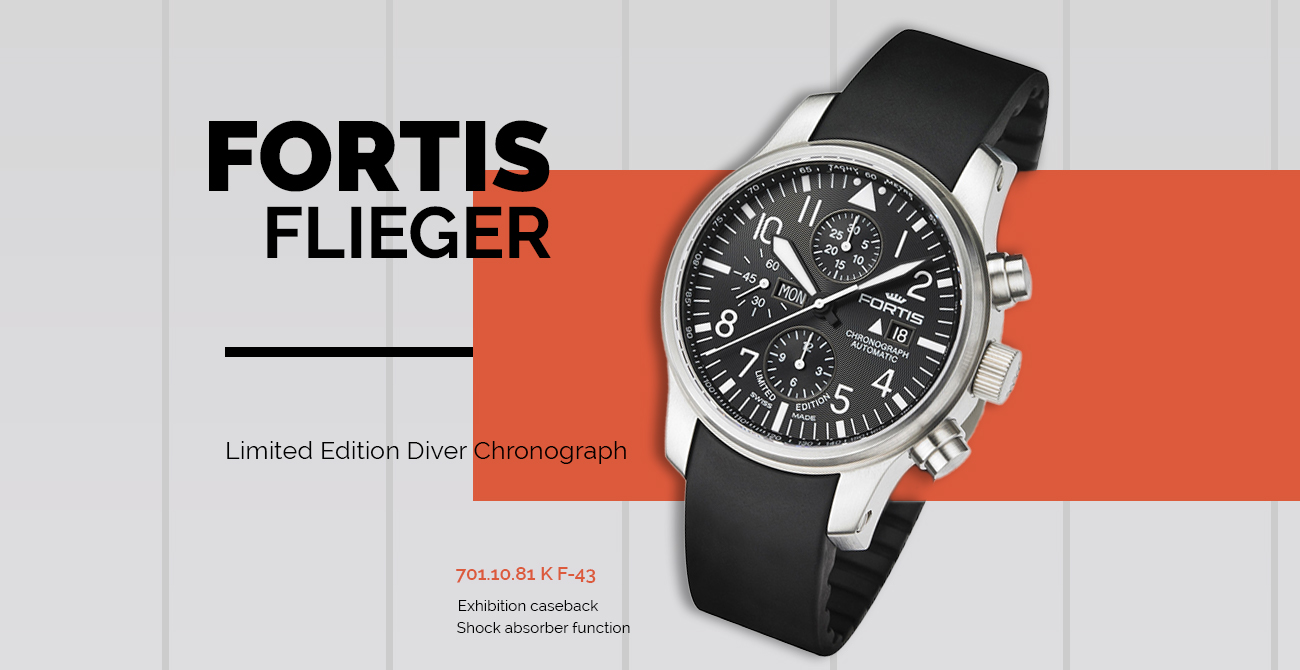 Because the dive watch is such a popular choice of tool watch, the Flieger, which is also a tool watch, could be overlooked as wrist wear that offers an alternate and very sleek style. The German’s developed the Flieger, which is German for pilot’s watch, in World War II for their pilots as an instrument for navigation in the cockpit. Five companies fulfilled the contract: Lange & Sohne, International Watch Company, Laco, Stowa and Wempe.

Inspired by the Flieger, the new Fortis 701.10.81.K F-43 Flieger Chronograph limited edition watch uses a classic layout on a black dial. There were two types of dials that were acceptable to German specifications on the Flieger watch. The Men’s 701.10.81.K F-43 Flieger Chronograph watch opts for the Type A (Baumuster A) used from 1940 to January 1941, an arrangement employing illuminated hands and white Arabic numerals with a triangle surrounded by dots representing 12 o’clock. The reason for the triangle instead of an Arabic numeral was to allow pilots to orient the watch in the correct position when night fell.

The original German Flieger only required the time element without complications. The Fortis 701.10.81.K F-43 Flieger Chronograph is a modern interpretation, so it builds in more functionality to the watch. In addition to the clear view of the time, it has the added feature of a chronograph aesthetically placed with minutes, running seconds and hours respectively at 12 o’clock, 9 o’clock and 6 o’clock. It also provides the day and date opposite each other at 9 o’clock and 3 o’clock. As an added bonus for car nuts, Fortis also inserted a tachymeter on the flange. In other words, the Fortis 701.10.81.K packs a punch of useful tasks in one package.

In a modern-sized 43 mm case composed of durable stainless steel with a nice grippy crown and chronograph pushers in the 2 and 4 o’clock position, the Fortis 701.10.81.K F-43 Flieger Chronograph Watch comes on a black rubber strap with a push button deployant clasp. Its automatic movement is on view through the sapphire crystal caseback. No worries with most water activities, as the watch is water resistant to 660 feet.

For a tool watch that stands a bit apart from the crowd and has just as much cool history, the Fortis 701.10.81.K F-43 Flieger Chronograph Watch is a fashionable and functional option. Purchased your Fortis watch from an authorized Fortis dealer.