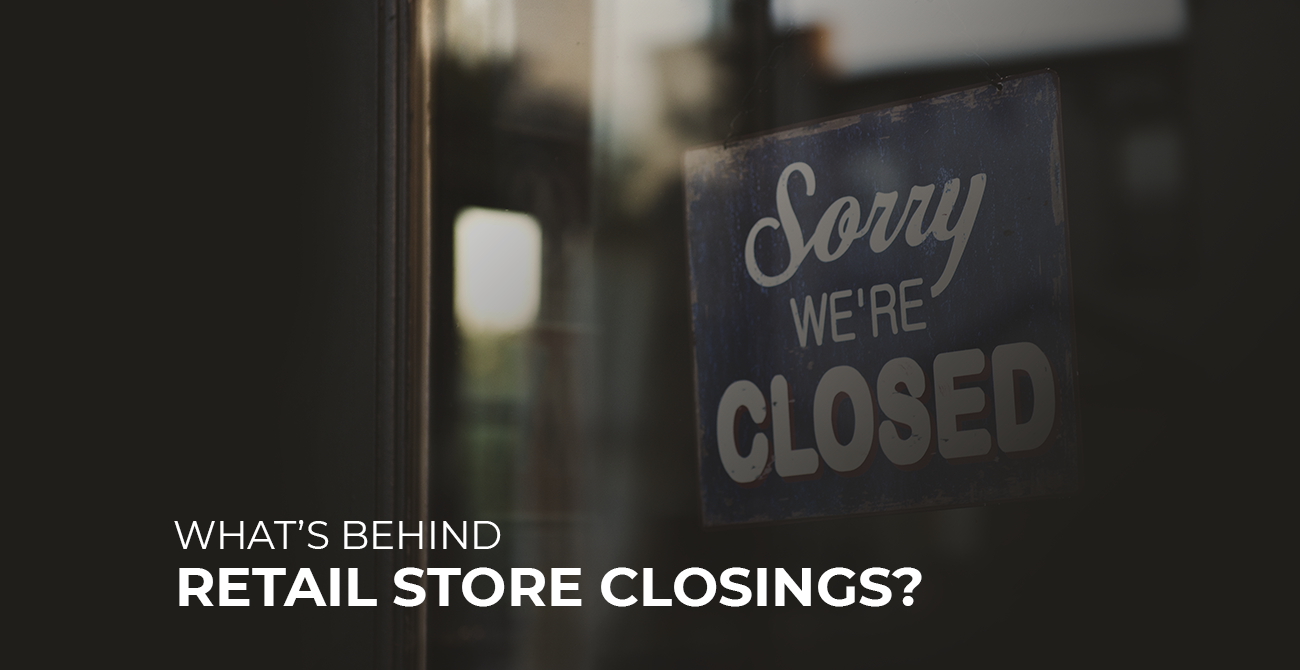 Out of the Malls and Onto the Internet

Most of us who follow the retail industry are aware of the wave of store closings that has taken place over the last few years. Since closings occur intermittently, however, you may not realize that roughly 5,759 stores in the US have shuttered since 2012. These include apparel companies like Jones Group and The Gap, restaurants (Wendy’s, Qdoba, Applebee’s), home furnishing stores (Kirkland, Pier One) groceries (Food Lion, Kroger, Stop ‘n Shop), toy and entertainment outfits (Build-A Bear, Game Stop) and tech companies (Cellular One, Apple). You can find an alphabetical list of all US retail store closings through September 25, 2013 here.

Certainly the Great Recession has something to do with this, but that doesn’t account for the fact that many of the same companies closing brick-and-mortar stores are expanding their online operations. These moves to the Internet have dramatic consequences that reach well beyond employees and consumers to affect communities and related industries, and not in good ways.

The obvious example is shopping malls. Most real estate professionals acknowledge that vacancy rates are high in many malls across the country and rents are depressed. Green Street Advisors, an analysis firm that tracks commercial real estate funds, predicts that 10% of the 1,000 largest malls in the U.S. will fail within the next 10 years. Some mall CEOs think that’s a conservative figure.

There’s a website called Dead Malls that tracks those shopping centers that are already abandoned or well on their way. Of the 33 JC Penney stores slated for closing, three are on the Dead Malls site: Muscatine Mall in Muscatine, Iowa, Military Circle Mall in Norfolk, Virginia, and Singing River Mall in Gautier, Mississippi. Macy’s plans to close stores in two more: Fiesta Mall in Mesa, Arizona, and Medley Center in Irondequoit, New York. Abercrombie & Fitch is closing a store in yet another mall on the endangered list, Oaks Mall in Gainesville, Florida.

It appears that these particular malls, along with most of the others listed, while not going gentle into that good night, they are slouching toward oblivion, dragging community spirits down with them. Part of their woes are caused by the oversupply of mall real estate. The US has so many malls that when one closes shoppers can easily drive 10 or 20 miles to another. Add to this the ‘smart growth’ and walkable cities emphases in current urban planning theory and you easily see that the curtain is descending on the malls’ last act.

So what happens to these dinosaurs littering the suburban landscape, becoming eyesores in the communities they once served? Sometimes mall owners just call in the demolition equipment. Occasionally, though, more creative solutions are devised. Although not located in a mall, an abandoned Wal-Mart in McAllen, Texas was turned into the largest, single-story library in the country by Minneapolis-based architects Meyer, Scherer & Rockcastle, Ltd. The conversion plan included space to establish a community gathering place, which serves as an updated version of the town square.

Wal-Mart, once roundly criticized for letting its abandoned stores lie empty to prevent competitors from moving in, now has a subsidiary called Wal-Mart Realty. According to its website, “Walmart Realty’s mission is to find businesses to open in our former stores and clubs and to locate in available property around our stores. At Walmart Realty, we believe we have a responsibility to work with communities to find a use that generates economic growth and opportunity.”

While this is a positive development, it assumes that there are companies interested in opening brick-and-mortar stores, a debatable idea. “If I were thinking of starting a new retail brand right now, I would unquestionably start it online,” writes Jeff Jordan, a partner at Andreessen Horowitz and board member for several online retailers. He points out that online retail will continue to steal business from brick-and-mortar stores and that will place even greater pressure on shopping malls.

Even online retailers that do move offline to open physical stores are doing them as Internet showrooms, where customers view samples and then place orders. This is a stark departure from the traditional retailer that stocks inventory in its stores. Jordan cites two, Bonobos and Warby Parker, that began online and are now employing this showroom model.

There’s a joke going around that says Best Buy, which recently closed 10 stores, has become a showroom for amazon.com. Consumers visit Best Buy, check out the product they’re considering, then go home and order* their preferred model online. I’ll admit that I’m guilty of doing this exact thing when shopping for a high-definition television, not because Amazon had a cheaper price, but because the delivery is so much less hassle than dragging a TV home myself. It’s small conveniences like this — and probably others that are less apparent — that are driving consumers online.

All this does not mean that the retail industry is in trouble. Only that the mechanics of selling are changing. As Bette Davis said, “Fasten your seat belts. It’s going to be a bumpy night.”

*Or order then and there from their Smart phone.