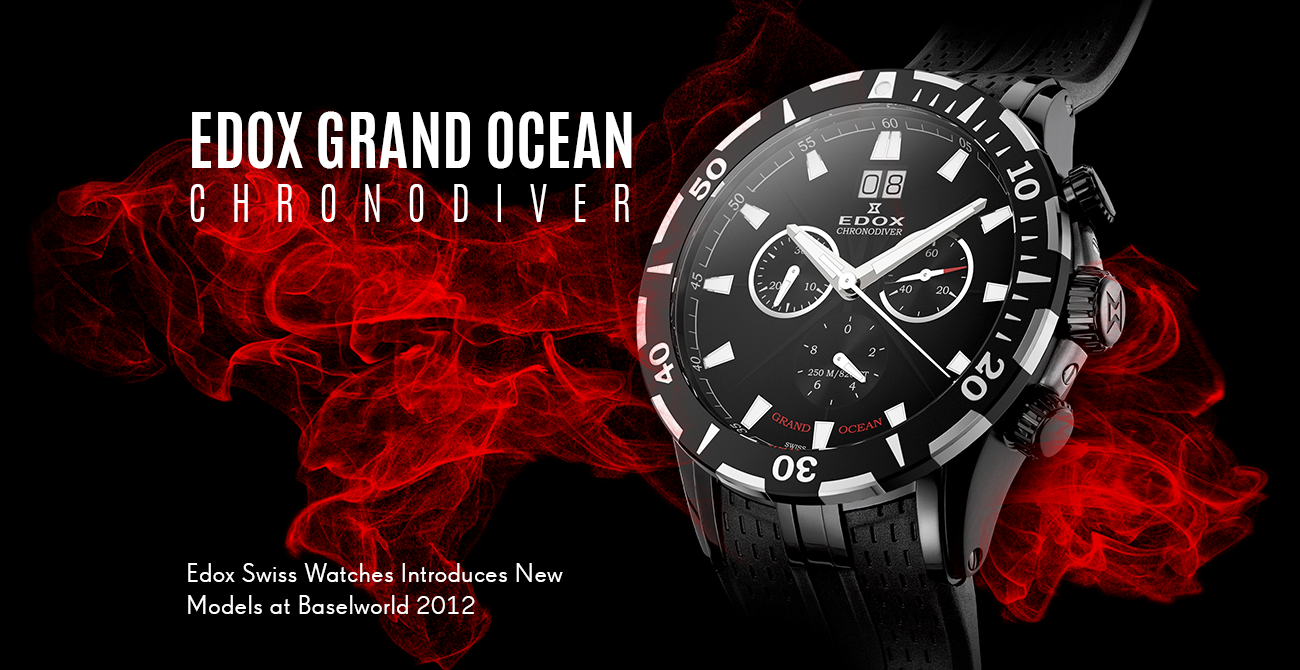 Edox introduced three new watches at Baselworld 2012 earlier this month, choosing to build upon its core designs by extending its existing collections. Two models in the Grand Ocean Collection were introduced along with one in the World Rally Championship (WRC) Collection.

The first novelty is the versatile Grand Ocean Chronolady from the popular Grand Ocean Collection. The Chronolady is designed for women with a sporting spirit, for whom elegance and a sense of freedom resonate. Like its Grand Ocean counterparts, the Chronolady is inspired by water sports and yacht racing. Distinctive Grand Ocean elements include the planisphere engraved on the caseback and the triple-lug design, which fastens the light, ultra-feminine white rubber strap to the aptly sized 36 mm case. The matching white dial is embossed with a wind rose – yet another detail that speaks to the watch’s seafaring origins. The Chronolady contains a Ronda 5040.B movement for the best in Swiss accuracy and is water resistant to 330 feet.

A second addition to the Grand Ocean Collection is the men’s Grand Ocean Chronodiver, a watch that retains the genetic imprints of its predecessors but also introduces something entirely new: a bezel containing both stainless steel and rubber, which not only enhances functionality by improving grip, but also creates a balance in the overall design by uniting the black PVD-coated steel case with the black rubber strap. An ebony-black dial along with silvered indices and hands augments the cohesive modern look. The planisphere on the back of the Chronodiver is different than other Grand Ocean watches in that it provides a view from the North Pole. Another notable detail is the outside of the folding clasp, which is in the shape of a porthole with the Edox hourglass logo centered in the middle. The Grand Ocean Chronodiver houses a Ronda 5040.B movement and, naturally, this diver watch offers superior water resistance to the depth of 820 feet.

The third new release is the Chronorally Automatic Chronograph, part of the WRC Collection. Edox is the official timing sponsor of WRC. Designed for drivers and motor-sports enthusiasts, the Chronorally has all of the features generally associated with the collection such as the profiled rubber strap and oversized aluminum push-button. The dial features carbon fiber and a silvered tachymeter. The Chronorally boasts an unusually large caseback window – nearly 36 mm in diameter – perfect for admiring the famous Valjoux 7750 automatic chronograph watch movement inside.

Edox will begin rolling out these new models this summer through authorized Edox retailers. Edox Swiss Watches is the official timekeeper of the FIA World Rally Championship, the Class-1 World Powerboat Championship and the Dakar Rally.