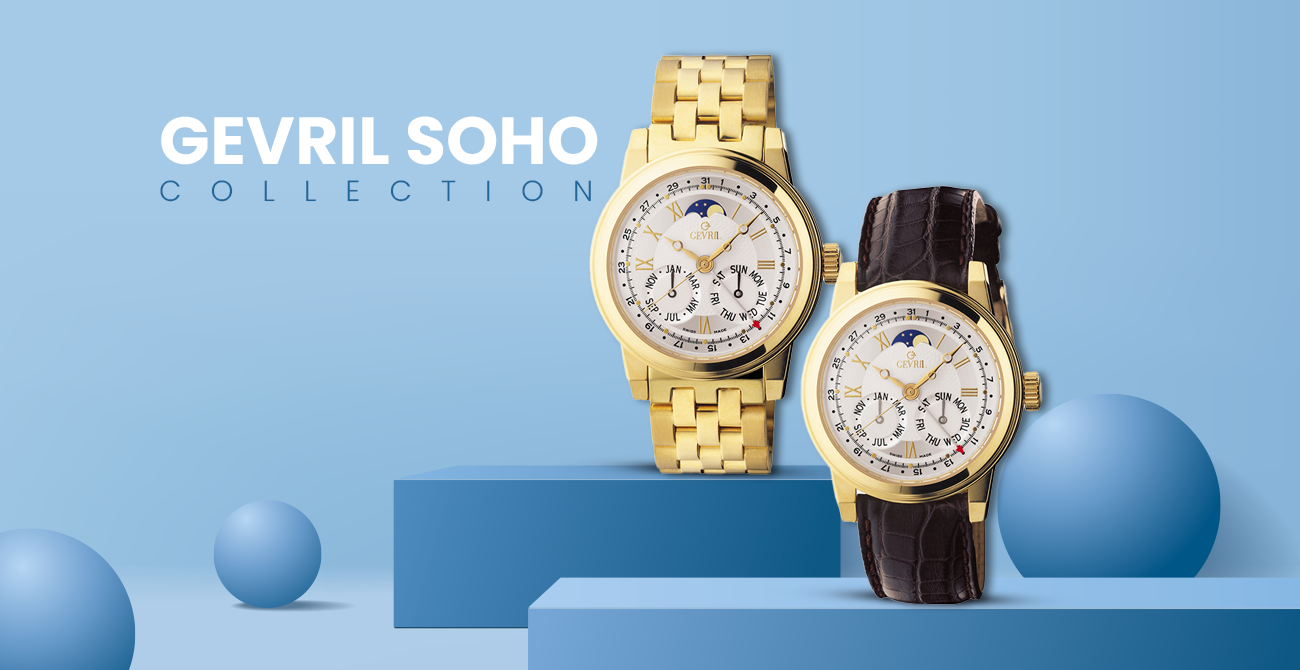 The Soho watch by Gevril is one of four watch styles that make up the brand’s New York collection (the others are Chelsea, Gramercy and Madison). The watch is named after the prestigious Soho area in lower Manhattan, a small but concentrated shopping mecca composed of boutiques and big brand stores. Soho is an acronym for South of Houston (Street), but it is also a reference to the well-known area in West London, England. Most of today’s Soho is a part of the Soho Cast Iron Historic District, a landmark designation it received in 1973 as a result of its collection of cast-iron architecture, the greatest of its sort in the world.

Metals – stainless steel and gold – are also an important aspect of the watches in the New York collection, including the Soho, which shares several traits with other models in the New York family. The case, for example, is 39 mm in diameter and available in limited editions: 500 in stainless steel, 100 in 18 kt. yellow gold. Every watch is paired with either an integrated link bracelet or brown crocodile leather strap.

Other similarities include the silvered guilloché dial, blue pomme hands (generally referred to as Breguet hands) and Roman numerals. The gold versions have gold hands, Roman numerals and hour markers to match the case. The front crystal is sapphire, as is the crystal on the caseback, which provides an ample view of the movement. The watch beats steadily by way of a 25 jewel automatic movement comprised of a base ETA 2824 and Dubois Dépraz 9200 module. The gold version of the Soho incorporates a gold winding rotor.

The Soho is a triple-calendar like the Chelsea, but instead of apertures to display the day and month, the Soho features two small pointer sub-dials. The date is also recorded by a pointer hand, mounted centrally and marked by a red-tip arrow that corresponds with the date track on the outside of the dial. Inset pushers on the sides of the case allow for quick adjustment of the sub-dials.

The catalog entry for this mid-’90s release describes the Soho as having “composition of shape and proportion balanced with sweeping color.” To achieve this, the Soho mixes concentric circular shapes. These include the dial’s central guilloché and surrounding chapter ring; the two sub-dials and the moon phase aperture; the hands, and the hour markers. The sweeping color is denoted by the blue (or gold) hands and the red arrow of the pointer date that revolve around the dial.

Every watch in the New York collection is connected with an upscale area of Manhattan, and each of them has a personality that is consistent with the neighborhood it represents. These watches also represent the benchmarks by which the high quality and craftsmanship of Gevril watches are measured today. The Soho watch is no different, with its impressive details and styling, it’s a watch that is locked amiably in a Soho groove. Check the Gevril Outlet online for availability of NOS (new old stock) Soho watches.