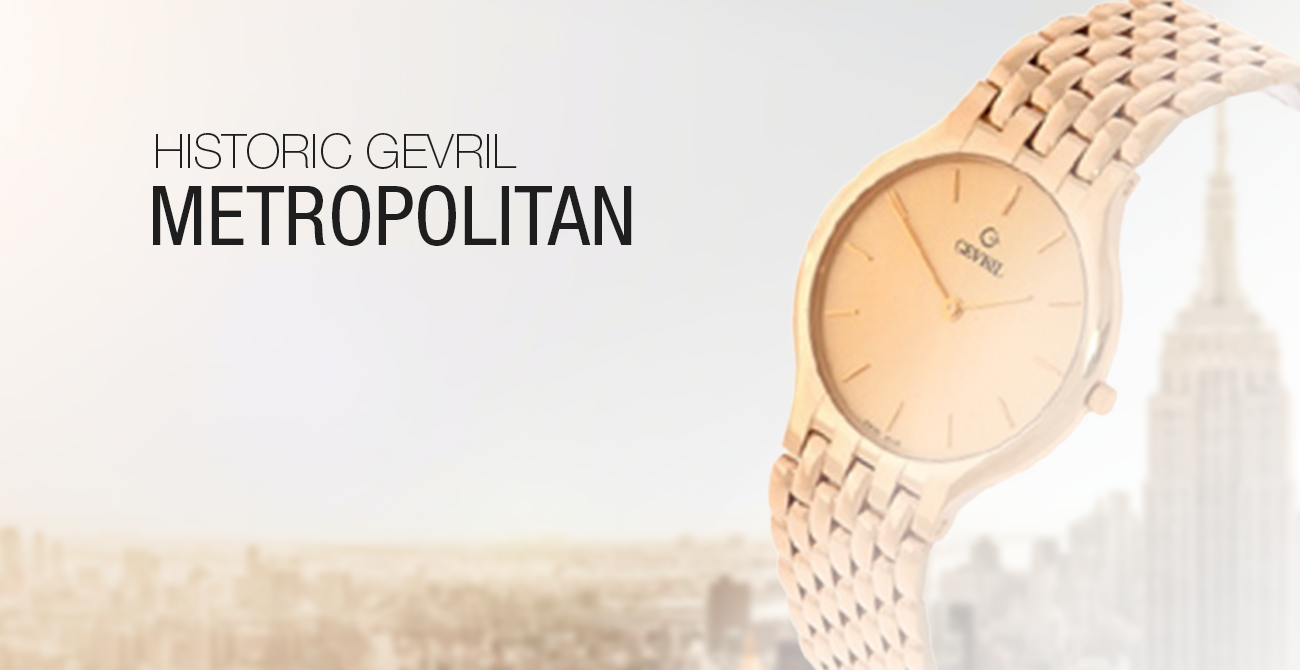 The modern Gevril tradition of naming watch collections after prominent New York neighborhoods and landmarks is well documented. One of the brand’s historic releases was the Metropolitan collection from 1997, named after the greater surrounding area of metropolitan New York. As one of the most populous urban areas in the world, metropolitan New York encompasses a large area that includes Manhattan and Long Island in addition to parts of New Jersey, Connecticut and eastern Pennsylvania.

Gevril’s watchmakers were aware that choosing a single design to embody the personality of such a large region was impossible, since it included a diverse group of cultures and communities. Instead, they agreed upon a design that represented Gevril’s brand values – specifically, its commitment to quality and to designing watches with refined sensibilities – a value proposition that has long been the foundation for Gevril watches.

The 1997 Gevril catalog described the Metropolitan collection as having “genteel sophistication, capital presentation” and the Metropolitan was indeed unapologetic about its upper-crust persona. The case was a demure 32 mm in diameter and quite thin, which represented the classic composition of a sophisticated dress watch (before the emergence of the “big watch” trend that followed soon after). The case and bracelet of the Metropolitan were made from 14 kt. yellow gold, yet the overall design was uncomplicated; its rich personality was innate rather than embellished.

As a result of this elegant construction and in the tradition of a formal dress watch, the dial of the Metropolitan was sparse, a graceful two-hander, with no need to overstate or put on airs. It was a capacious swath of gold color with thin applied hour indexes and the Gevril logo. The watch’s two hands were equally thin. There were two dial variations: one that included a minute track and another with hour indexes exclusively.

An unusual aspect of the Metropolitan collection was the variation in lug constructions. There were two different lug setups for each of the 14 kt. gold bracelets and another for the strap. One version was designed to accommodate a mesh-style bracelet; another style had curved lug-ends that were designed to match a second type of interlink bracelet, and; a third version had traditional straight lugs that jutted out to accept a leather strap.

Each Metropolitan watch was water resistant to 165 feet and featured a sapphire crystal. Ticking inside was a Swiss made ETA 282.001 quartz movement.

The Metropolitan collection set the tone for the many Gevril timepiece collections that followed with its combination of superb materials, refined craftsmanship and Swiss made components. Gevril remains committed to delivering this level of quality, and the great city of New York is its continual inspiration.