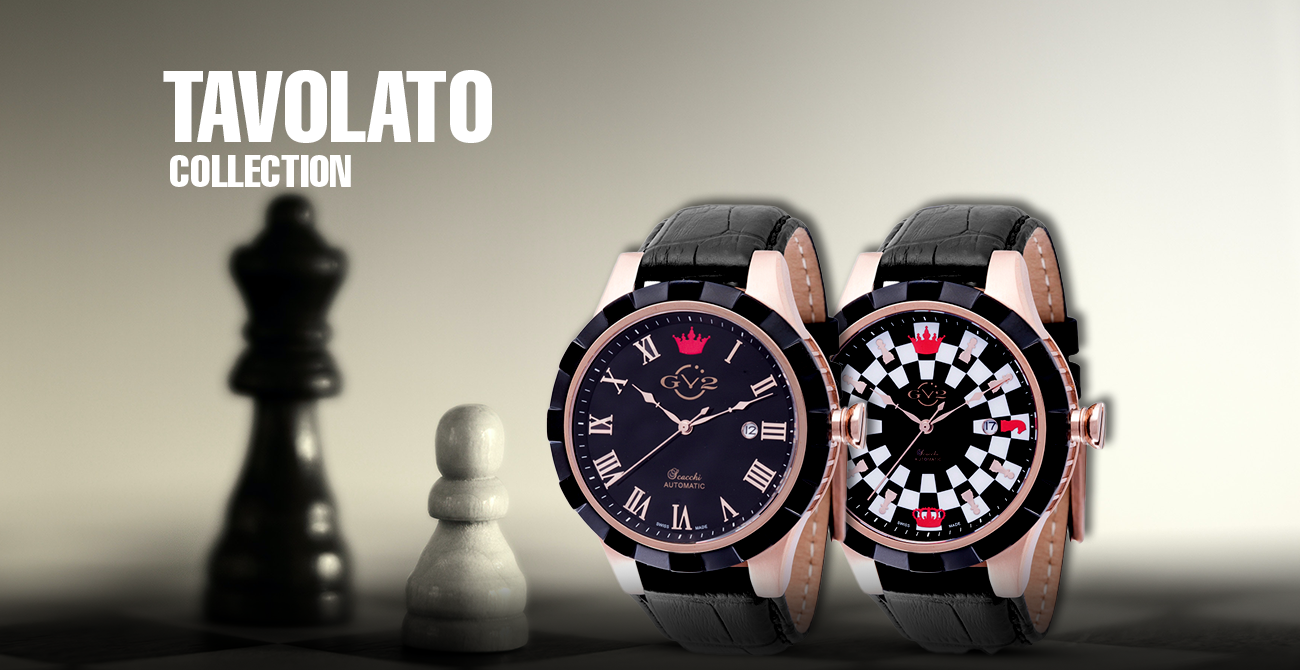 Chess is an ancient board game of strategy and tactics played by millions of people around the world. The game’s ongoing popularity is owed in part to the myriad possibilities of how a match can unfold, which is dependent on the mastery of strategies and maneuvers.

Like a watch, chess is portable: all that is required is a chessboard and a set of pieces called chessmen, which can be toted easily from one place to another. And like mechanical watchmaking, chess has an innate connection to several branches of mathematics making it an apt theme for watch design.

The GV2 Tavolato is a men’s collection of chess-themed watches — tavolato is an Italian word for chess. Each Tavolato watch features a substantial 46 mm case made from stainless steel. The caseback boasts a round checkerboard engraved pattern as well as a small aperture to glimpse the movement’s winding rotor. The sides of the case are fluted, as is the head of the crown, which resembles a rook — an important chessman.

Tavolato checkered dials resemble a chessboard from a bird’s-eye view. In addition to the board, the design features a red king’s crown at 12 o’clock, a red queen’s crown at 6 o’clock, red knights (represented by horse heads as they do in the game) at 2 and 9 o’clock, and white pawns at the remaining hours. The hour and minute hands are also shaped like chess pieces, probably bishops, although they could also be variants of the king or queen since chessmen have numerous forms from one set to another.

Variants with the solid black dial retain the red crown at 12 o’clock, but use Roman numerals as hour markers instead of chessmen to create a more traditional look and feel. The date function at 3 o’clock is mutual to every Tavolato model.

Every GV2 Tavolato watch contains a Swiss made self-winding movement, a sapphire crystal with anti-reflective coating and a black leather calfskin strap, which pairs well with the watch’s black bezel. Tavolato watches are water resistant to a maximum of 165 feet and each variant is a limited edition.

Chess is the game of kings. Some enjoy it quietly between friends; others play competitively at the international tournament level. The Tavolato watch by GV2 is appropriate in either scenario and versatile far beyond. Whether it’s to express a general interest and strike up a conversation, or simply to delight in the game’s regal sensibilities on a daily basis, consider the GV2 Tavolato as the next addition to your watch collection. Contact an authorized GV2 dealer to find out more.