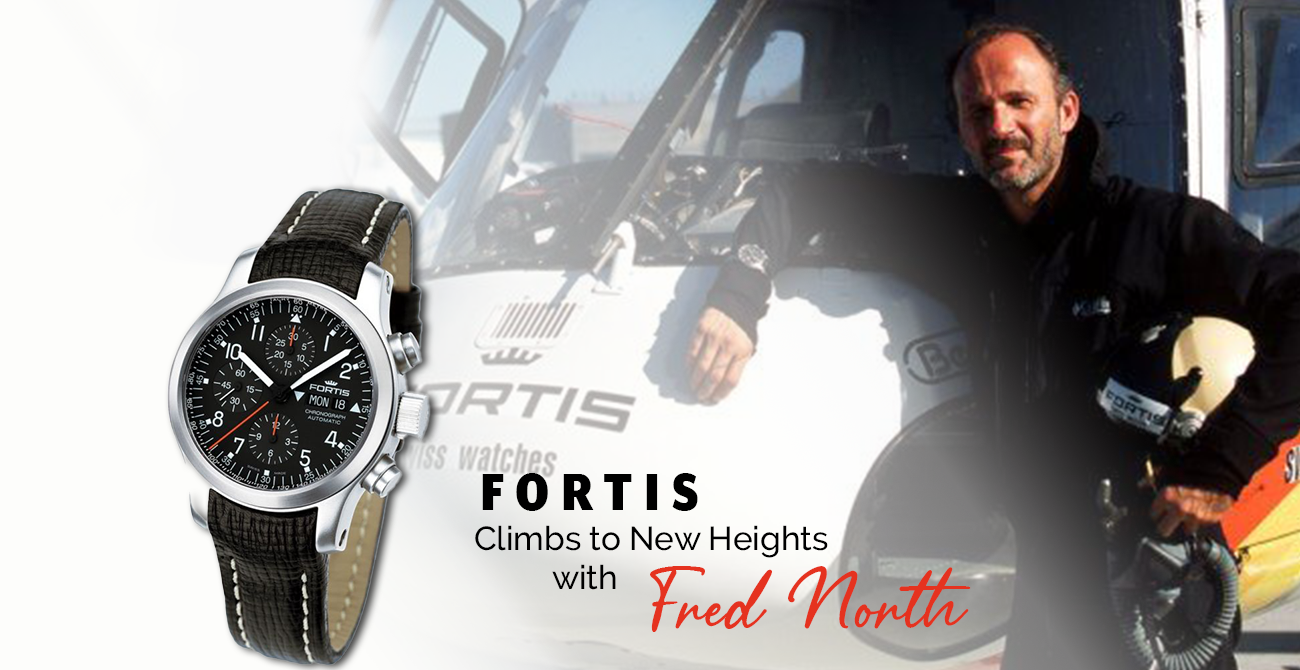 When Fred North Set the World Altitude Record for Helicopters,
He Took Along a Watch That Wasn’t Afraid of Heights
You may not know Fred North, but you’ve definitely seen his work. He is the helicopter pilot responsible for the fantastic aerial shots in blockbuster movies like The Bourne Legacy, Man of Steel, Total Recall, and The Expendables. This award winning movie pilot has always been up for a challenge and he was determined to beat the altitude record for helicopters set by Jean Boulet over thirty years earlier.

To reach his goal, North selected a French helicopter known for its endurance and high altitude capabilities: the B2 Squirrel. This powerful, durable helicopter had already gained fame for landing on top of Mount Everest and currently sees frequent use as a search and rescue vehicle in inaccessible, mountainous areas. The B2 Squirrel seemed like the ideal machine for this record challenge, but it still needed modifications. To save weight, Fred kept instrumentation and interior equipment to a bare minimum. However, he always made sure to take along a good watch: his trusty Fortis B-42 Pilot Professional Chronograph.

Fortis watches are no strangers to high altitudes. Renowned for their precision, durability, and easy-to-read dials, these dependable aviation timepieces have become a favorite of pilots and astronauts worldwide. Aerial acrobatic teams, military pilots, and even the crew of the International Space Station depend on Fortis, and so did Fred North when he made his astounding record flight.

Helicopters are not known for their high altitude capabilities. To reach his record setting altitude of 42,500 feet, Fred had to plan his assent and decent very carefully. At high altitudes, Fred’s B2 Squirrel operated with only 25% of the power that was normally available at lower altitudes. The helicopter’s rotors just didn’t have much air to bite into, and the powerful turbine engine had a tendency to flame out. Even breathing became a problem for Fred, who had to wear oxygen equipment and a special thorax compression jacket.

Although there were a few tense moments when the pressure regulator valve on Fred North’s flight suit wasn’t working properly, this accomplished pilot was able to accomplish what many thought was impossible and surpass the record set by Jean Boulet over thirty years earlier. Although Fred is extremely proud of his record setting flight, he says that taking a helicopter to 42,500 feet is a once in a lifetime experience. “I will never do it again,” he says.

You can continue to see the remarkable work of Fred North at a movie theater near you. Wherever he flies, there’s certain to be a Fortis aviation watch on his wrist.