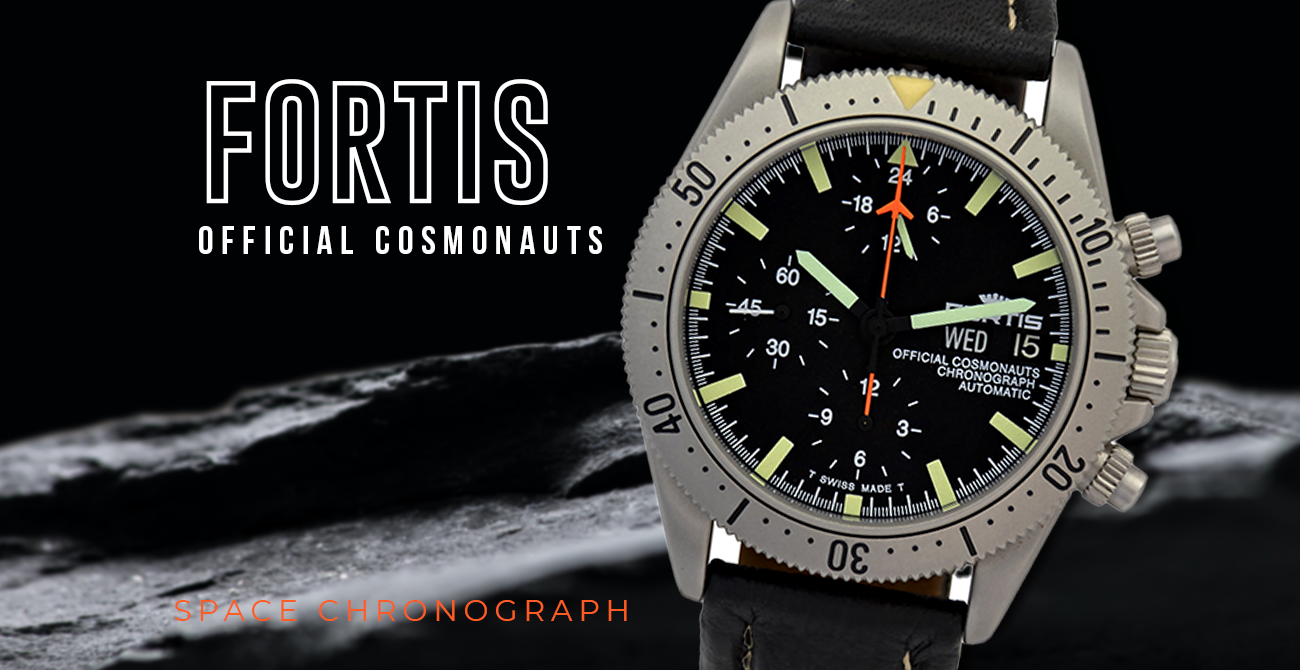 The First Automatic Timepiece to be Certified for Space Travel

Fortis has been involved with developing timepieces for space travel for over forty years. As early as 1962, the Fortis Spacematic was selected for use by several of the original Mercury astronauts. As the space race continued, Fortis developed new ties with the Russian space program and created a timepiece specifically for use on manned space missions. In 1994, the Fortis Official Cosmonauts Chronograph Automatic became part of the regulation equipment handed over to cosmonauts before each launch. To this day, every cosmonaut and astronaut who goes through the training program at the Yuri Gagarin Cosmonaut Training Center in Russia receive a Fortis watch as part of their official space equipment.

For many years, astronauts thought that a hand wound watch was necessary on space missions to ensure reliability. Fortis proved that an automatic timepiece could be just as reliable by putting the Official Cosmonauts Chronograph Automatic through some of the most rigorous endurance tests ever conducted. To simulate conditions encountered in low earth orbit, the watch was subjected to extreme negative pressure in a test chamber. In less than 160 seconds the normal air pressure of 760 Torr was lowered to near vacuum conditions of only 40 Torr and kept at this pressure for a full ten minutes before being returned to normal. The watch suffered no adverse effects and continued to perform normally.

While in orbit, astronauts experience up to 16 sunrises and sunsets during a 24-hour period. Under these disorienting conditions, an accurate wristwatch can help astronauts maintain their orientation to “earth time.” During his mission, Dr. Merbold was impressed with how the neon orange chronograph hands and strong luminosity of the tritium-enhanced hands and numerals on the Official Cosmonauts Chronograph made visibility easy under the adverse lighting conditions found on the space station.

Although Fortis has certified new models of the Official Cosmonauts Chronograph Automatic for space flight, the original 38mm stainless steel timepiece is still in production. The only change is that a modified ETA 7750 movement has been substituted for the original Lemania 5100 movement. The watch is available with a 60-minute rotating “countdown” bezel or a fixed tachymeter scale. Cosmonauts are presented with a special “Cosmonauts Set” that includes a special oversized nylon band that is designed to be worn over a spacesuit, along with the standard leather strap and stainless steel bracelet. In recent years, the Official Cosmonauts Chronograph Automatic Collection has been expanded to include a model based on the Fortis B-42 for those who prefer a larger diameter timepiece.

The Fortis Official Cosmonauts Chronograph Automatic is an extremely rugged precision instrument that has been subjected to some of the most rigorous testing ever endured by a production timepiece. The build quality on this watch is impressive, from the solid steel bracelet to the double coated anti-reflective sapphire crystal, screw down crown and chronograph pushers. This is a timepiece that won’t let you down, whether you’re in deep space or just driving around town. To this day, the Fortis Official Cosmonauts Chronograph Automatic is still the only official timepiece of the Russian Space Program.

Many of today’s “performance watches” are nothing more than clever marketing. The Fortis Official Cosmonauts Chronograph Automatic is the real thing! If you’d like to wear a timepiece that has actually proven itself in space, contact an authorized Fortis dealer immediately and ask about their growing collection of space proven timepieces.