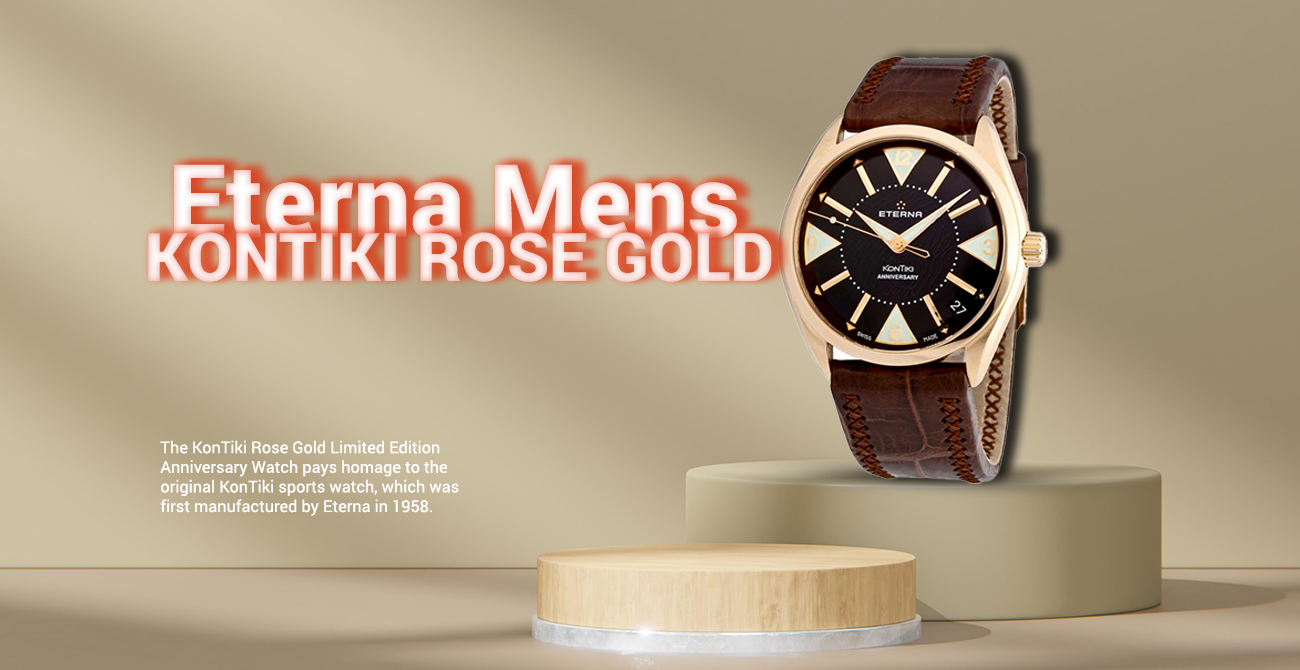 Not only is the KonTiki the most well known collection in the Eterna line, it is arguably one of the most well known watches in history. When Norwegian explorer and writer Thor Heyerdahl embarked on his famous 1947 voyage across the Pacific Ocean in a small balsa wood KonTiki raft to prove that pre-Columbian civilizations in South America could have settled the Polynesian Islands, he took an Eterna timepiece with him. This sturdy, waterproof watch survived the rigorous expedition and later developed into the Eterna KonTiki sports watch line.

The KonTiki Rose Gold Limited Edition Anniversary Watch pays homage to the original KonTiki sports watch, which was first manufactured by Eterna in 1958. The dial features a silhouette of the Raroia Atoll, the unintended — but successfully reached — final destination of the KonTiki raft. Gold plated, triangular index marks, a domed dial, luminous hands and a screw down back also pay homage to the original KonTiki design. This special anniversary edition is equipped with an automatic Eterna 3010 movement with a fast change date.

Only 50 of these exclusive satin finished red gold watches have been produced to honor the 50th anniversary of the Eterna KonTiki line. For authenticity, this 40mm anniversary model is slightly smaller than other models in the current KonTiki collection. Each KonTiki Rose Gold Limited Edition Anniversary Watch features an engraving of the KonTiki raft on the screw-in back and is water resistant at up to 660 feet.

The brown crocodile strap, with its unique crossover stitching, was inspired by the hawsers used in the construction of Heyerdahl’s balsa wood raft. Each of these exclusive watches is delivered in a handcrafted traditional Polynesian box sporting the KonTiki sun god motif.

The original KonTiki sports watches have become the Holy Grail for watch collectors around the world. Now, a few very lucky people have an opportunity to own an elegant and very exclusive homage to Thor Heyerdahl’s famous watch. If you are interested in acquiring one of these impressive watches for yourself, contact your Eterna dealer immediately and reserve your KonTiki Rose Gold Limited Edition Anniversary edition today. 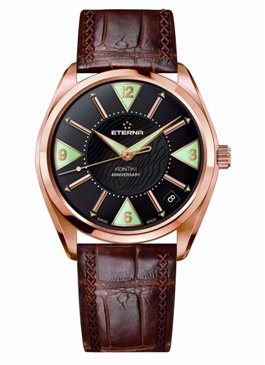