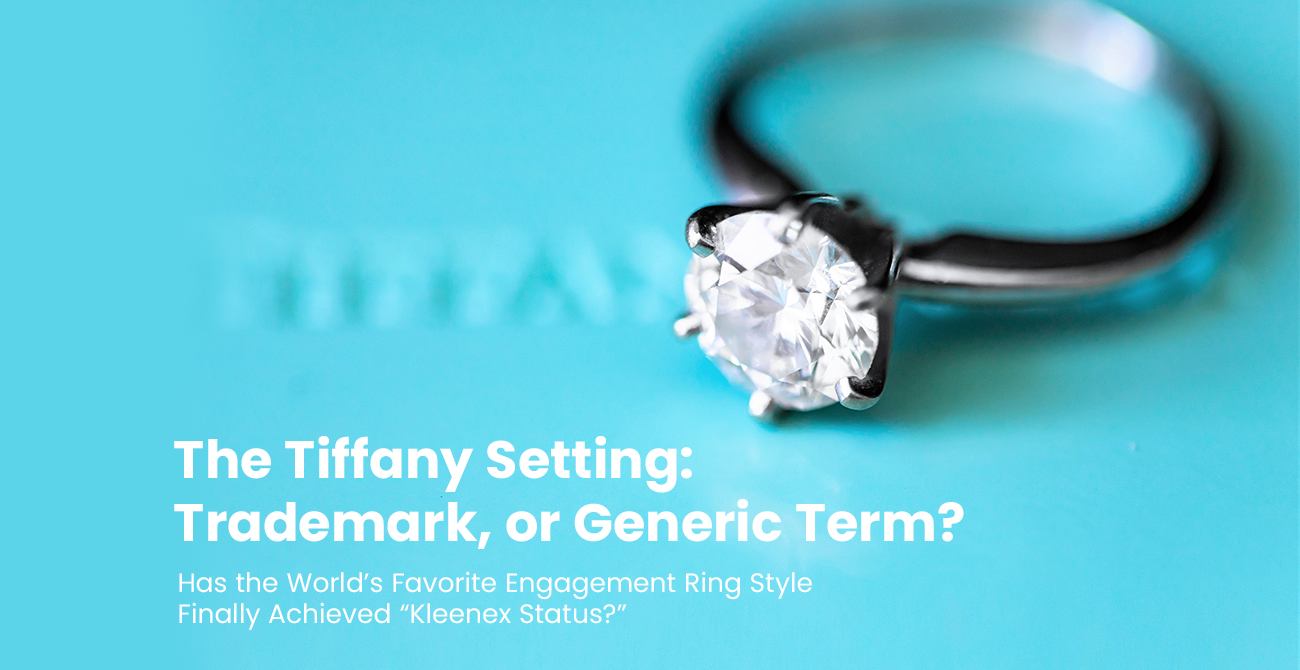 Has the World’s Favorite Engagement Ring Style
Finally Achieved “Kleenex Status?”
When Charles Lewis Tiffany was looking for a ring with more “shine” he ended up inventing the world’s favorite engagement ring style. Before the arrival of the Tiffany setting in 1886, all diamonds were set in a bezel, so only the crown was visible. To expose more of the diamond’s surface and enhance the stone’s sparkle, Tiffany and the company’s gemologists developed a new type of setting using several raised claws designed to hold a diamond securely while exposing much more of the stone for viewing.


This new style of setting, called “the most brilliant ring ever” by fans, quickly became the world’s favorite type of engagement ring. The ubiquitous Tiffany Setting is now so popular that it is used colloquially throughout the jewelry industry to describe any multi-pronged solitaire ring setting. Although many now think the term Tiffany Setting has reached “Kleenex status” and become a generic part of the language, Tiffany & Company does not agree.

When Does A Brand Name Become A Generic Term?

The issue of whether the word “Tiffany” is now a generic term for these popular ring settings has now reached a New York federal judge. Tiffany & Company has sued discount giant Costco for selling counterfeit rings that it claims are falsely advertised as Tiffany. Costco denies the claim, saying that the company never intended to sell “Tiffany rings,” only unbranded rings having a generic Tiffany style setting. “Our rings have no brand name embossed on them, are returnable at Costco, and come with a Costco appraisal,” said a Costco spokesperson. To bolster their claim, Costco has point out that popular books like Wedding Planning for Dummies and Dictionary of Gems and Gemology, as well as advertisements from many retailers already use the term “Tiffany setting” generically.

Tiffany & Company still thinks that the setting invented by company founder Charles Lewis Tiffany is theirs and theirs alone. “When Costco used the Tiffany trademark to refer to goods that had nothing whatsoever to do with Tiffany & Company, they infringed Tiffany’s trademark, while damaging both their own customers and the Tiffany brand,” said company spokeswoman Linda Buckley.

Litigation as a Form of Manipulation

Did Costco customers really think they were buying a Tiffany ring? Or is this just another frivolous lawsuit designed to preserve the stature of the luxury jeweler? Our language is constantly evolving. Many brands and slogans that were once exclusive to a manufacturer have become generic trademarks. Can you imagine not being able to use the term Band Aid, Frisbee, Kitty Litter, Thermos, Kleenex, Ping Pong, Velcro, and Q-Tip? These are all popular brand names that have become generic as a result of their popularity and widespread use. Will the term “Tiffany setting” become the next to join the growing list of names that have simply become part of the language? Costco says the term has already become generic. Tiffany & Company disagrees. Now it’s up to a judge to decide. One thing is certain. This law suit provides for many people another good example of excessive litigation in the United States.