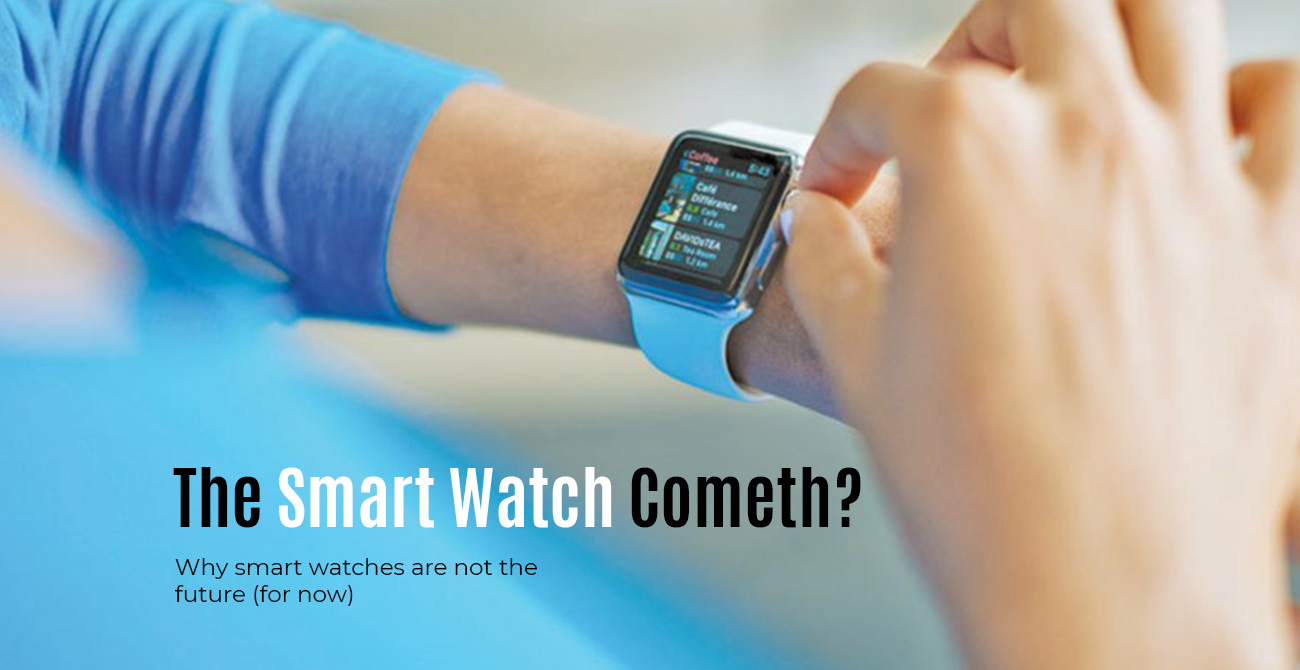 Why smart watches are not the future (for now)

Who here remembers the cartoon character Dick Tracy? Back in the 1940s, Tracy wore a watch that featured a two-way radio – perhaps the earliest reference to a so-called “smart watch.”

In real life Seiko released the Data 2000 watch in 1983 – a wrist-mounted data-storage device that connected to a special keypad. It was one of the first watches with computing ability and one of the earliest smart watches. Did the Data 2000 change the way people wore watches? No, not at all; nor did any of the smart watches that came later including the Microsoft-developed SPOT (Smart Personal Object Technology) smart watches of the mid-2000s.

Today, after 30 years of development, smart watches are making bigger waves with new models arriving to market at a record pace. They are increasingly useful, wearable computers that work in tandem with our other devices. Smart watches run apps and play media; some already function as phones – much like Dick Tracy.

Why the sudden deluge? Surprisingly, it has little to do with demand; rather, the proliferation is due to advancements in technology and access to cheaper components. Oh, that and the fact that tech companies want to cash in, naturally.

But smart watches come with some serious limitations. The biggest is they do everything your smart phones do, and less. A smart watch may assist you in managing your mobile device but it will not replace that device. So why bother? For looks? Doubt it.

Men, for example, already face a limited choice of fashion accessories. Watches are one of them, and a fashion-conscious guy takes his timepiece seriously. Smart watches are too busy trying to become relevant and functional to look sharp (and geek chic will only carry them so far). Furthermore, they require a significant display area, which means they all look more or less similar, relying on a few obvious physical differentiators to set them apart.

Smart watches need to win us over with utilitarian value, with functionality that offers us something more or completely different than what we already have. For now, they are less stylish than a wristwatch and less technologically useful than a smart phone. They defy obvious trends in usage, too, like the proclivity towards larger screens – unlike a smart phone, which pushes the limits of our pockets, purses and attachés, a smart watch cannot grow the size of our wrists.

Impact on mechanical and quartz watches

Among watch insiders and enthusiasts, the talk is of course about the impact of a smart watch revolution on traditional wristwatches, and whether or not it will lead to their becoming obsolete. The fact is, mechanical watches enjoy immense popularity today because they are obsolete. People wear them because they love the artistry and lengthy history associated with mechanical watchmaking.

Quartz watches should also have diminished in popularity by now in our smart-device world: people could easily leave them at home, relying instead on their smart phone to tell time. But people like the way they look, and with annual global sales in the billions, quartz watches seem to have a rather strong following, too.

Smart devices are here to stay; smart watches, well, maybe. (Starfleet, after all, preferred the smart brooch.) In the next several years we will undoubtedly see advancements. If smart watches do become an accepted innovation, they will likely phase in to our lives over time – there will be early adopters; others will wade in when their professional life requires it; and still more when the applications become the norm.

But the time-honored mechanical wristwatch is no danger of disappearing, nor is the ever-practical quartz watch. We like what they represent and the way they look. Smart watches – well, for now, they’re just gadgets.