After running among the leaders throughout the morning warm up at the Homestead Miami Grand Prix, APR drivers Josh Hurley and partner Gary Gibson were looking forward to a strong race. “We don’t quite have the outright pace of the BMW’s right now, but our tire wear is much better. After ten laps we have the best car on the track,” said Hurley. 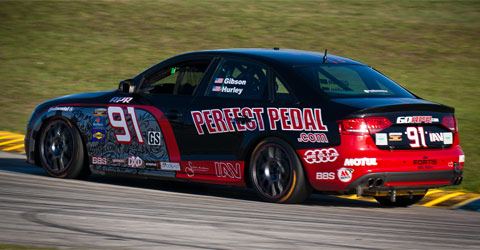 “The team has concentrated heavily on getting the most out of used tires as Homestead wears them quite quickly, so look for us to run much stronger as the race goes on,” Josh went on to explain. Gary Gibson then strapped into the Perfect Pedal, Fortis Watches, APR Motorsport, Audi S4 and pulled onto the grid in the 17th position.

At the outset of the race, Gary hung back from the pack, waiting for the other cars to slow. Just 15 minutes into the race, the field began to slow, and one-by-one Gary moved through the pack. However, lady luck was not with Gary on his journey through the pack. A BMW and Mustang collided just in front of Gary in his Audi, and wile Gary managed to avoid the incident by going around the outside of it, the Mitchim Camaro of Robert Stout came upon the incident, ricocheted off the BMW and bounced right into the Perfect Pedal Audi S4 of Gary Gibson. The Camaro had hit Gary in the dead center of the right front wheel, causing suspension damage.

Gary brought the car over to the APR Motorsport crew and was back out just a few minutes later. The time lost would preclude the team from being a factor in the event, but Gary was able to go back out and run with the leaders, including the eventual winner of the race.

While luck may not have been on the Perfect Pedal, Fortis Watches side, it is evident that APR Motorsport has developed the Audi S4 into a front running car.

“The reason this weekend is so heartbreaking is that, for the first time, we have a car that can win races. Right now I’m counting the days to our next event at Barber Motorsports Park on April 9th. We have a few more development items in the pipeline, and I look forward to running in the front of the pack. Hopefully our bad luck streak is finally behind us!” said Josh at the conclusion of the weekend.