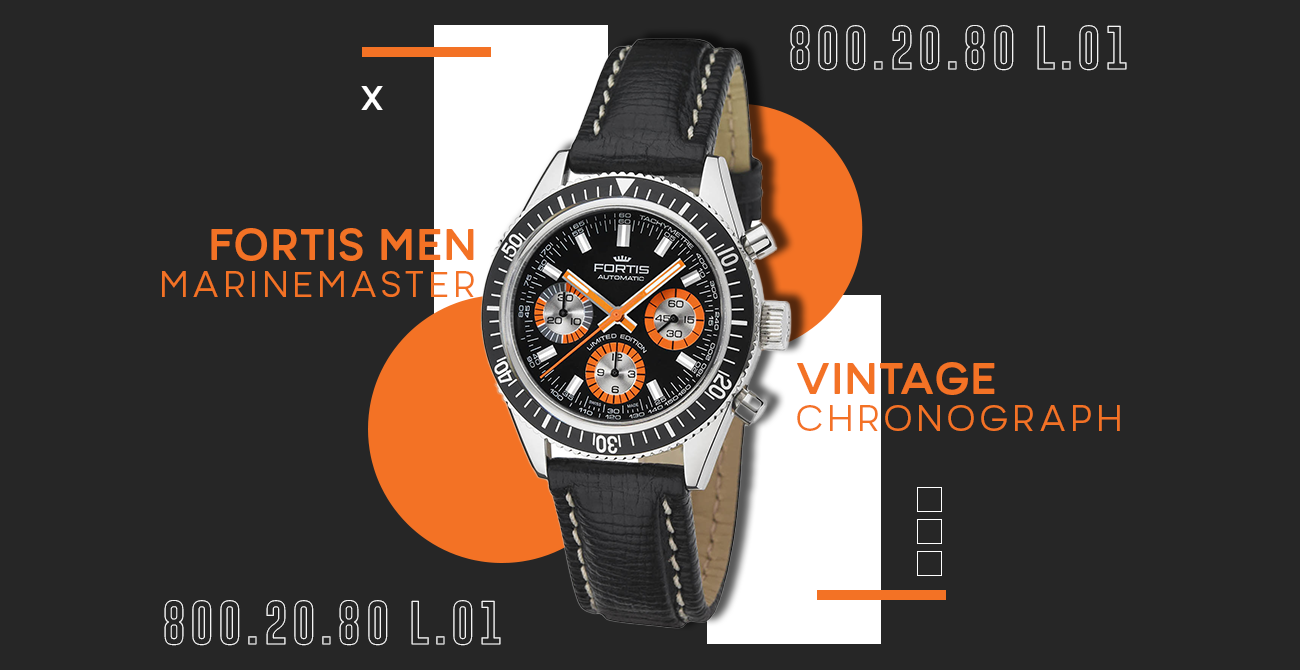 Popular culture steers people to explore new and different trends. But some designs continue to work – decade upon decade – and those labeled “classic” always return to favor. Such is the case with the Fortis Marinemaster watch, originally released in the 1940s. The Marinemaster remained in the Fortis lineup for decades, and the Marinemaster Chronograph was popular well into the 1970s when the quartz movement revolution forced the watch industry to rethink its mechanical future. The industry bounced back in a big way, as did many of the classic watch designs of the 20th century.

Today, reconnecting with classic watches of bygone eras is as popular as ever. As part of the brand’s centennial celebrations, Fortis released two versions of its Marinemaster Vintage Chronograph in 2012: one with blue accents and the second, shown here, with orange accents. Both are limited editions of 500 pieces.

The Fortis Marinemaster Vintage Chronograph watch is true to the look of its predecessor in most ways including the shape of the lugs, the piston-style chronograph pushers and the unidirectional, graduated dive bezel. Similarities extend to the dial, too, including the orange sub-dials; the two-tone 30-minute sub-dial; the shape of the hands and hour markers; the minutes-and-seconds track, and the tachymeter scale at the outside of the dial.

Enthusiasts will note that the position of the 30-minute counter and the 60-second counter are reversed compared to the ’70s iteration, which is a result of the configuration of the new automatic movement – the Fortis caliber F-2020 – an ETA 2892-A2 base with a Dubois Depraz 2020 chronograph module.

Other than the upgraded movement, the most notable difference is the watch’s exhibition caseback that provides a view of the movement in action. The water resistance of the Marinemaster Vintage Chronograph is 165 feet (less than the original, which was over 650 feet).

The three-part case is made of stainless steel and measures 40 mm in diameter. Another nod to the original is the inclusion of domed acrylic on the front that is made of PMMA – the same type of acrylic that was used before the advent of synthetic crystal. The watch is mounted on a black calfskin strap with white stitch and employs a traditional clasp buckle.

If the reliability of a modern watch is more appealing than the quirks of vintage, or a vintage model simply eludes capture, consider the Fortis Marinemaster Vintage Chronograph watch. Its classic retro design in tandem with an updated automatic movement will remain a favorite long after the whim of the next style craze.