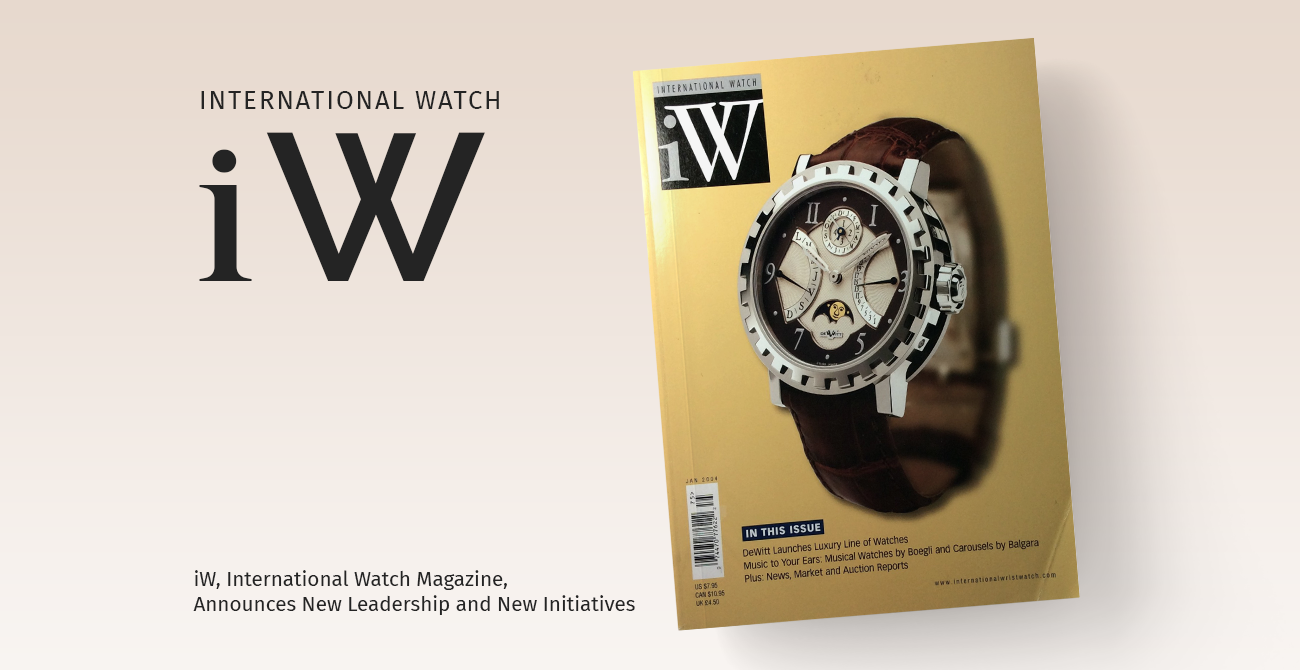 Fairfield, Conn. (June 20, 2011) – iW, International Watch magazine, unveils a new vision for its future, led by energetic entrepreneur and President of Fine Life Media (publisher of iW magazine), Danny Govberg. To accomplish what will be a dynamic series of changes, Govberg has announced a shift in leadership at the magazine. Effective immediately, he will assume publishing responsibilities, a role previously held by Gary Girdvainis.

Since acquiring Fine Life Media in 2002, Danny Govberg has tirelessly worked to expand the watch category, emphasizing brand and retailer relationships, as well as consumer education among enthusiasts and collectors. “The future of iW will be based on engaging these populations in unique, interactive and educational experiences, while simultaneously providing fresh content in real-time, ” shares Govberg.

Among the forthcoming changes, consumers can anticipate a multi-channeled approach to the delivery of content across three separate platforms – print, web, and mobile. The monthly magazine will soon reveal an updated aesthetic, and iWmagazine.com will be re-launched with daily updates, and a series of interactive and customizable components. Michael Maler of Rise Against Studios is directing the digital initiatives. Govberg shares, “Our web content will be tailored to the interests of the reader, allowing him or her the ability to shift the focus of the information provided.” This feature will allow iWmagazine.com to be relevant to both members of the watch industry and the casual watch consumer alike.

While the company will maintain its corporate office in Fairfield, Connecticut, Govberg will establish a Philadelphia-based publishing team. Noah Stein, who has most recently served as the associate publisher for Niche Media’s Philadelphia Style magazine, has come on board to assist Govberg with the re-positioning of the publication. Stein brings with him 11 years of luxury publishing experience, with a proven track record of revenue-generating ideas and initiatives.

Caroline Kallman Joffe will work alongside Govberg and Stein, serving as associate publisher of Fine Life Media, and director of the Leading Watch Retailer project. She has worked for Govberg in various capacities for the past six years, most recently serving as the Marketing Director for Philadelphia-based Govberg Jewelers. Gina Fusco, who has been with Fine Life Media for the past 8 years, will maintain her current role as associate publisher of International Watch magazine. Fusco boasts 14 years of experience in advertising sales at iW and other luxury publications.

Michael Thompson has been promoted to Editor-in-Chief, bringing with him 25 years of high level editorial experience. His background spans several high-quality industry publications including Jewelers’ Circular-Keystone (JCK) and Professional Jeweler, as senior editor and senior New York editor, respectively. Since 2003 Thompson has served as Editor of iW, representing the magazine in the U.S. and abroad. Thompson holds a Master’s Degree in Journalism from the prestigious Medill School of Journalism at Northwestern University.

Jonathan Bues has also been promoted, and will assume the position of Web Editor in addition to his role as Managing Editor of iW magazine. Bues has been a member of International Watch’s editorial team since 2005. Exceptionally interested in the technical side of watches, Bues enjoys writing in a way that makes complicated horology accessible to readers and consumers. His stylistic approach will lend quite favorably to the web. Bues adds, “I am really excited to be leading iW into the digital world.”

Founded in 1989, Fine Life Media publishes iW, International Watch magazine, the world’s only monthly watch publication for both the trade and enthusiasts. International Watch and its special publications, North America’s Leading Watch Retailers and the Stylus Pen Annual, are distributed directly to subscribers and thousands of points of sale worldwide. They are also available through fine jewelers and watch retailers around the world.