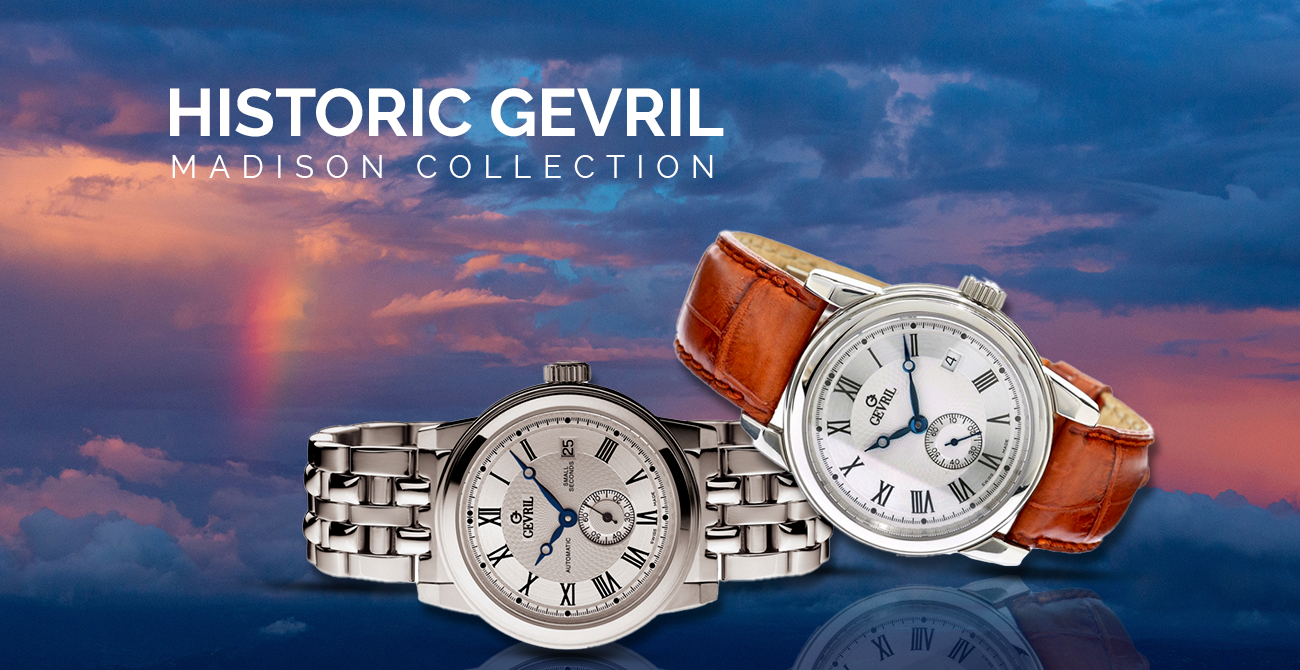 The grandeur of New York’s Madison Avenue is captured in a 2000 watch release from Gevril – a watch known simply as the Madison. Madison Avenue runs south-north through the heart of Manhattan. It originates from Madison Square Park at 23rd Street – named after the fourth U.S. president, James Madison – and flows northbound all the way up to 135th Street where it merges with the on-ramp to the Madison Avenue Bridge.

Beginning in the 1920s, Madison Avenue became synonymous with the American advertising industry, which flourished in the ’50s and ’60s. Many recognize the name as the setting for the hit television series Mad Men, which first aired in 2007. Today Madison Ave. is a world-class shopping destination with upscale boutiques that house many of the biggest names in fashion and luxury goods, including several watch boutiques.

Like the glory days of the ad industry, the Gevril Madison watch weaves its own narrative; this is a story of refinement and sophistication that is worthy of the grand Gotham thoroughfare.

Madison watches were encased in one of two materials: stainless steel or 18 kt. yellow gold. Each case was 39 mm, large enough to showcase the superb dial work but small enough to stay within the limits of discernment. A polished bezel with a tiered rim gave way to a brushed case side with a vertical grain, which met another polished rim at the caseback.

Inside the caseback rim, a coined pattern bordered the perimeter. Engravings denoted particular details including the reference number and the limited edition number: in the Gevril tradition, the stainless steel model was a series of 500 and the gold a series of 100. Sapphire crystal, front and back, provided durable scratch resistance. The large crystal on the caseback also allowed for an ample view of the Swiss made ETA 2895 automatic movement, which featured a rotor stamped with the Gevril signature.

The remarkable case, however, was but a backdrop for the extraordinary dial, which featured a silvered finish and guilloché engraving. This fine decoration appears in the primary dial space, and within the small seconds sub-dial, and at the very edge of the outer dial. The applied serifed Roman numerals and pomme hands (generally referred to as Breguet hands) are the perfect complement. On the steel version, the hands are blue and the Romans are black; on the gold version both the hands and numerals are gold. The date window featuring beveled edges is another pleasing detail.

“Power to influence” was the catchphrase from the 2000 catalog entry for the Madison watch. The phrase, in essence, was also the hallmark of the ad industry during its 20th century boom. Gevril’s Madison watch was designed for the same type of self-assured innovators who built Madison Avenue, and it demonstrated the type of detailed work that remains a pillar of Gevril watch design to this day.

Note: Several watches from the Madison collection were held from distribution at the time of the original release and are available today, NOS (new old stock), at select authorized online retailers. Contact us for more information.